The American Sycamore, also known as Platanus occidentalis, American planetree, occidental plane, buttonball, and buttonwood, is part of the Platanus species and is native to the eastern and central United States be found in southern Ontario and Northern Mexico. The sycamore is one of the oldest species of trees on Earth and is known for its durability, hardiness, and massive size. There are ten different species of sycamores, which all share similar characteristics. The sycamore can be characterized by its bark, which tends to flake off, leaving a collage of creamy white, green, gray, and brown on the trunk. Sycamores overgrow, more than two feet a year, and can grow up to 40-100 feet high and 3-8 feet in diameter and can live to be more than 200 years old. The fast-growing sycamore nature makes them popular among those who want the benefits of a large tree sooner rather than later.

The dynamic Sycamore can be in wetland areas and city environments as it is very tolerant of urban pollutants. Overall, the Sycamore is easy to grow and can grow in any soil. However, it tends to grow best in well-drained, medium to wet soils in full sun. Its hardiness zones are Zone 4, Zone 5, Zone 6, Zone 7, Zone 8, and Zone 9. They tend to grow best and reach their largest size when planted along streams, rivers, and floodplains. The California sycamore has a favorable fire-resistance rating and can tolerate high heat and wind. They can withstand hot and cold climates, providing optimal shade with their leaves during sunny summer days and warm sun through the bare branches on cold winter days. In the fall, their leaves turn yellow-brown and return as dark green 4-10-inch-wide leaves in the spring accompanied by small clusters of flowers. The male flowers are a yellow color while the females are a red color. The female flowers can produce fruiting balls, where the Sycamore got the name “buttonball tree,” which ripens and falls in the fall. These balls are packed with seeds that disperse as the ball disintegrates. The Sycamore is best used as a shade tree. In an extensive landscape as a farm or park due to its large size. However, it is often used on lawns, streets, complex growing sites, and decorations due to its ornate bark. It is known to attract a variety of birds, small mammals, and pollinators. The wood of Sycamore is widely used for furniture, cabinets, crates, butcher blocks, and barrels. The sap of the Sycamore is also helpful as you can boil it into a pleasant-tasting syrup. 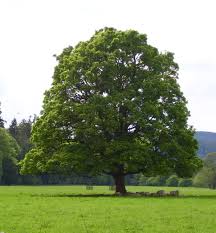 There are several varieties of sycamores, including the previously mentioned American and California and the Arizona Sycamore and English Sycamore. The Arizona sycamore resembles the California tree and can be found near canyons, streams, and rivers in Arizona. The English Sycamore is a hybrid between the American sycamore and the Oriental sycamore and is also known as the London plane tree. The bark of the English sycamore is darker than others and can have purple tones. The English sycamore has varieties of its own, including the Columbia, Liberty, and Bloodgood. The Columbia is known for its orange bark, the Liberty is pyramidal in form, and the Bloodgood is anthracnose resistant and is known to tolerate droughts better than others. Although the sycamore has several varieties, they are all sure to be a durable, low-maintenance tree that will last beyond your lifetime and will be seen by generations to come.