Fiesta Forsythia is a small deciduous shrub, standing out from other varieties of Forsythia for a number of reasons. It only reaches heights of between two and three feet and has a spread of two to five feet with a nice mounded appearance. It is a low maintenance plant that will reward gardeners with showy golden-yellow, bell-shaped blooms from March to April, as well as colorful foliage. The leaves are variegated yellow and bright emerald green with creamy white centers. The leaves reach about four inches in length providing a nice look even when the plant is not in bloom, unlike other Forsythia that provide no interest after flowering.

The Fiesta cultivar of Forsythia makes a great border plant because of its compact shape and size and is suitable for urban growing as well. It also makes a fine foundation plant and can provide interest to slopes or even be used as a small specimen. It grows close to the ground and does not require additional facer plants. They are tolerant of many soil types, including clay and even sand as long as there is adequate drainage. They flower best in full sun, but can also be grown in partial shade with more vigorous blooms in proportion to larger amounts of sunlight. Water requirements are moderate, needing only additional watering during prolonged dry periods. Fiesta is easily grown in USDA zones 5 through 9, sometimes experiencing only minor damage to buds in zone 5 if a late frost occurs.

Other Forsythia are known for becoming large and unruly, requiring extensive pruning and cutting back to keep under control. Fiesta remains in a nice mound and only requires some minor pruning in the spring after the plant has finished blooming. Simply remove any of the older branches that have started to look more "twiggy," being careful not to over-prune. Removing these stems promotes the growth of new stems to keep the plant looking lively.

Most choose to grow Fiesta Forsythia because it is a very early flowering plant. It is often one of the earliest plants to bloom in a garden, immediately after the close of winter and at the start of spring. It is also a great choice because it is very hardy, experiencing very few to no disease or insect issues. They are also unappetizing to deer, which will ravage other similar plants. It is considered to grow at a medium rate and will live for up to thirty years in an ideal environment. The plant originated in Korea and is in the olive family, Oleaceae. In some parts of the world, this variety is called the Golden Bell, describing their flowers. 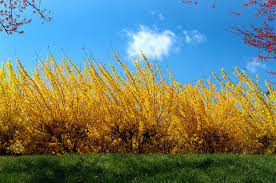